In his new work Ondrej continue on path of previous solo work.
His latest songs are composed with accent on vocal aspects of didgeridoo.
New 8 songs have its own atmosphere, mainly intimate, folk-isch almost like songwriting pieces…
Most of songs were recorded as solo didgeridoo, some songs are slightly enriched with bells and gongs and clapsticks…

Atmosphere of whole album is continuing, moving you from one feeling to other..
with intuitive taste for keeping listener diving in, without being bored…
Didgeridoo music listeners scene has again new examples, how can be used in contemporary music…

Its easy to enjoy this album while driving, practicing yoga, having tea… 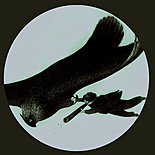