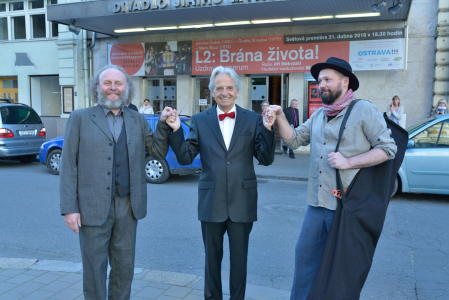 Libreto made by Jaroslav Dušek
Music made by Ondřej Smeykal, Mario Buzzi

In 2016 National Moravian-Silesian Theatre – theatre of Jiří Myron in Ostrava put on the premiere of L2 composition.
It presents to the audience many unusual and extraordyniary aspects.
The true story is seemingly simple and Jaroslav Dušek asked me for preparing the music on its base.

Story happened deep back in 80ties...Clemens Kuby, german ambitious artist and politician unfortunately fell out of the window and seriously injured- disintegrate his backbone. After this he should been confined to wheelchair for the rest of his life. But Clemens doesn´t give up the fight with the destiny and he heals himself so well that after one year and half he gets out of the bed, walks again and leaves the hospital. One of strangest things on his healing is, that he did it without any surgery help, and his neural channel in backbone is interrupted till today, he is over 70years old, and he walks and dance.. without any problem. Till this day he has been following up with therapeutic qualities of his experience and he helps others. He makes movies and the most interesting documentaries, as well he leads workshops to teach people how to heal, improve their lifes..
This story did really happen and it is about him.
There was written a lot about Clement Kuby, he is truly inspiring man of current world. Here is link to his Czech publisher: www.clemenskuby.cz . I can really recommend his books.
We focused in our opera on root of the whole story,
which is about main believing of Clemens, that his healing is possible. To show everybody, that his belief becomes true. I decided to compose this real story in seven musical pictures, which loosely follow on from each other and represent the most powerful moments from Clemen´s fight.
Opera works with symbolic compression, minimalistic symbolism, mosaics, the story is not told or linear depicted.. but it is composed into full picture from emotional fragments in mind of audience.
From the beginning of this project I knew that this is unique possibility which I am thinking off long time about – not to use didgeridoo as the instrument of one interpret but to leave it for the origin of orchestral composition.
First I recorded main 7 themes, which are played on didgeridoo. Then together with Mario Buzzi who is very qualified and intuitive composer, we interpreted all movements in didgeridoo sounds into the language of orchestra. Harmony of orchestra was created step by step with all instruments, in the same way as I made it with playing on my didgeridoo.
Big thanks belong to the director of theatre Jiří Nekvasil who supported this unusual idea and helped to take it till to the premiere!!!
Because This opera is technicaly not easy for presentation in hosting destinations, we decided to create smaller version only for all characters, choir and two pianos. In this cast you can see it on Litomyšl festival in 2018... You are warmly invited....
With this project I finally managed to work in the way which I would like to go much deeper. In the past many composers based from organ for their orchestral compositions so I would like evolve same complex and intense work with archaic didgeridoo.
I belive that L2 is the first swalow...