A fifty minute long dive into the depthsof the giant gongs of Bear Love and the didgeridoos of Ondrej Smeykal.

The birth of this album was particulary tense...
After the one month long tour through the czech lands we had planned the recording in the chapel of the Lipnice castle. Almost at the spot we found out that our biggest instrument won't fit in the door.

And so the recording moved into the baroque chapel of Pacov.

The visuals of the CD are made of my own drawings which were influenced by the new record.

The album was baptised by Jaroslav Dušek in the Vidov quarry. 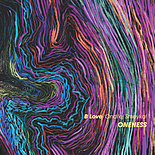