„When I have been looking for some didgeridoo player for my new projekt,
I found one of the top ten didge players in Prague...“ Jaz Coleman.

More than a decade has passed since Ondrej & Jaz began working together back in 2009 and now, finally, a product of this much anticipated collaboration has come to fruition in the form of a vinyl and download.

The project in its entirety is only just beginning to blossom but what we have now is a single ON THE DAY WHEN EARTH WENT MAD. The upcoming album will be a reflection of the current world situation. It is an urgent message. Its musical form is comprised of very simple musical instruments. Wooden clap sticks, voice, Indiam harmonium and Didgeridoo with added effects. In the hands or rather mouth of Ondrej Smeykal, the Didgeridoo takes on a percussive role or that of a seriously distorted electric guitar. The result of this world music/punk ensemble is a testament to this day and age. It is mixture of raw, punchy sounds ranging from ambient to dance & heavy metal.

I have been long long time searching for unique voice, singer, frontman who is not afraid of powerful singing with only one musician behind his back instead of whole band....“ Ondřej Smeykal.

The record was creating in Prague Faust Records studio which became home studio for Killing Joke and Coleman´s projects.
Black and Red project is special music which is acute and straight. It is composed and recorded on electronic didgeridoo, clapsticks, Indian harmonium and finally completed with Jaz’s poetry and singing..
These ancient, simple instruments in its origin are talking to us through filter of modern electronic sound design. There is connection among language of primitive nations and post-punk, industrial and techno music.

„I finally found my own raw, electric, massive and rythmic way to play didgeridoo. It was all done even without guitar, synthesizers...and rock drums.“ ... Ondřej Smeykal

The record itself is only one part of future live performance of this experimental duo.
Black and Red is also the presentation of Coleman´s project about phenomen of electromagnetic Earth grid. This basic connection is important in communication among human, Earth and universe, it is present in urbanism or culture of all ancient civilisation.

Project is calling for simplification, directness, specification of opinions. It talks about present cultural/political situation..
Black and Red projekt is in stage to get ready for presentation... 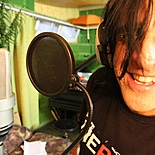 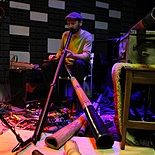 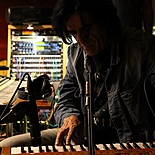