Singing Didgeridoo is a new studio record released after 4 years.

Although since 2009 many featuring or original projects have originated, many of them still await their release... And while the previous album was completed to hold one exact emotional atmosphere for the whole time, the new cd is actually a collection of individual, emotionally very different musical motives.
What do they have in common?

Each one of my playing period is characterized by being inspired by a certain creative element, which is able to be seen as the main compositional factor (in the previous periods it was for example rhythmically elaborated exhale and inhale or a rhythm formed by over-blowed tones and articulation syllables...). For this period it is the human voice. Each one of the tracks uses the voice as the supporting element, and in a traditional or non-traditional way resounds the instrument and culminates the song. A song - you may think it is a big word. Didgeridoo and a song? It is kind of my own dream and the main author's direction. To prove that the didgeridoo as an instrument fully belongs to the songwriting genre. I want to be able to present the Australian didgeridoo not only as a traditional or exotic, predatory or mystical sound, but also as something what formally and emotionally resonates with the listener at the first and even the further and further listen - that is what a good song does. Such songs I want to be able to play and I have tried to create a couple of them. The more adventurous and risky is my intention that I do not want to go through the beaten path. I process motives entirely on my own, as the sound of my didgeridoo inspires me again and again (and occasionally I'm discovering America ... you know? :) )

The new record is completed by both solo pieces and studio polyphonic compositions. Some of them will storm and lead you to dance, some of them will caress or open the gate to dreams... The polyphonic approach was surprising for me, I wanted to do more of the solo pieces, yet in the end, the album is made up of more polyphonic modulations... Well, sometimes the inspiration leads you through the unsuspected ways...

Perhaps the biggest moment of this new album for me is that in addition to sticks, gongs and bells is the album recorded on the didgeridoo or electrodidgeridoo. I mean, this seemingly backward instrument called the didgeridoo is still, after more than 20 years of playing, an incredible source of inspiration and a valid contemporary instrument to me. Like the spiral, it still picks up depth and subtlety. I hope that the new record will inspire you too.

The art concept of the cd is again my own work, drawings are converted into the deep embossing, and the silver foil manually pressed and bookbinded on a recycled paper ... 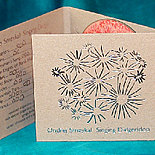 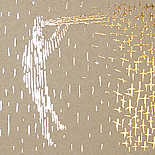 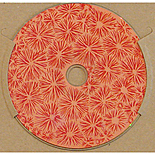